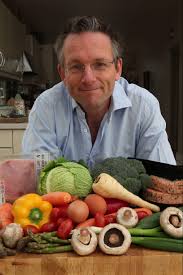 In The Clever Guts Diet Dr Mosley writes: “One of the reasons why fermented foods are so good for the gut is that, gram for gram, they contain a huge number of different microbes. The microbes in fermented foods are also far more likely than most other bacteria to make it safely down into your colon because they are extremely resistant to acid, having been reared in an acidic environment.”

Dr Mosley also singles out seaweed as a gut-boosting powerhouse.

“There’s a wonderful Australian researcher who I wrote about in the book [Dr Pia Winberg from the University of Wollongong], who has done some first ever human trials on the effects of seaweed on the gut,” he explains.

Dr Winberg recruited 64 people who were overweight or obese, who were randomly allocated to take one of three capsules each day for six weeks, Dr Mosley explains in the book.

One of the capsules contained 2g of a special seaweed fibre, the second capsule contained 4g, and the last capsule was a placebo.

Blood and stool samples were taken at the start and end of the study, and those who consumed the seaweed fibre experienced a significant reduction in inflammation, increased gut bacteria, and reduced constipation. They also reported feeling less desire for sugar and fast carbs, and experienced an improvement in psoriatic skin disorders.

“Asian [cuisines] have been big in things like seaweed, but seaweed has not, historically, been a major part of western cuisine. So I’m adding seaweed to my diet,” Dr Mosley says.